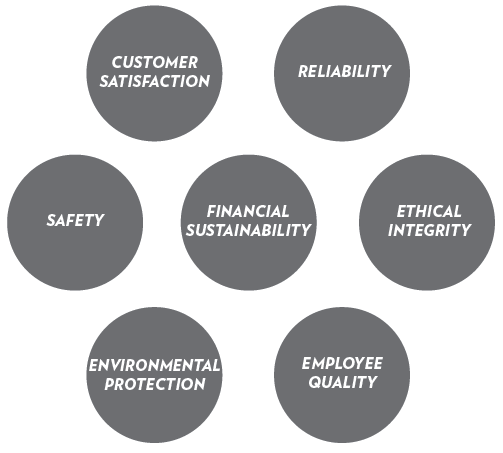 One of the greatest benefits of developing a framework of core values is that decision making can be decentralized. When people understand the company’s core values, there is no need for top-down command and control. Instead, you can implement “values-based decision making.”  The result can be higher levels of innovation, performance, and creativity.

In the early days of Southwest Airlines, Herb Kelleher and his management team wanted to reduce the turnaround time for aircraft on the ground. They set a goal of fifteen minutes. They got it down to ten. Kelleher describes watching in awe as the maintenance supervisors and frontline employees came up with innovation after innovation to meet what was seen as an impossible standard. How did they do it? Southwest had already established a culture of decentralized decision making and performance. What was standard at Southwest was the exception elsewhere.

The tension between centralization and decentralization tends to disappear when values-based decision making is in place. One California state agency, for example, articulated its core values and tied them to performance measures. The result? Dozens of new entrepreneurial ideas sprang up, with far less need for centralized check-off or intervention.

On the other hand, when core values are missing, bureaucracy and centralization tend to take over. One software company insisted on a uniform hardware and software platform for every single employee, despite the differences in end users’ needs. Customers complained about poor customer service; financial performance plummeted. A “black market” emerged to address the problem, creating further internal tensions. Lacking an explicit framework, the de facto values continued to reign, with the press for uniformity trumping employee innovation, trust, and satisfaction.

As you align the core values, see what remnants of older thinking you can get rid of.

Ask yourself whether the following systems need to be retooled to make them consistent with your organization’s core values:

As you align people around the company’s core values, you’ll find that each of these systems needs tweaking. For example:

Once you set these wheels in motion, it can take a year to get all your systems aligned. The fun is in seeing it materialize in the form of higher levels of trust.