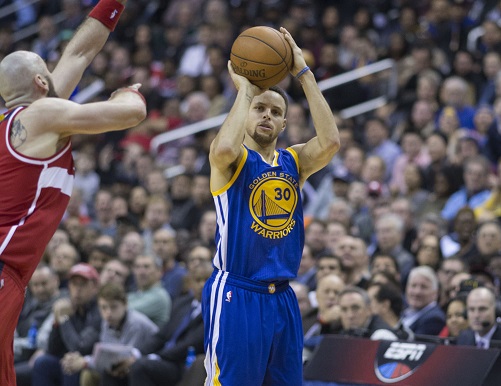 I had the pleasure of watching Stephen Curry warm up before a recent game between the Golden State Warriors and the Boston Celtics. For those of you who don’t know, Stephen Curry is the star point guard for the Warriors, the two-time MVP, and one of the most prolific scorers in NBA history.

I was standing on the court with my son, watching Curry go through his warm-up drills. He started by dribbling two basketballs up and down the court, his right hand controlling one ball, his left hand dribbling the other. Next, Curry went to the half-court line and began shooting baskets. For perspective, the half-court line is 47 feet from the basket. He did that 30 times. Even from there, Curry sank half his shots. Next, standing at the 3-point line (a mere 24 feet away) with his back to the basket, Curry caught the ball, spun 180 degrees and shot the ball through the net in a single graceful motion. He repeated that drill 30 times.

As I watched this incredible show of discipline and training, I asked myself, what’s my equivalent? What do I do that’s similar to dribbling two basketballs simultaneously? How am I elevating my game? More importantly, how can any leader elevate his or her organization’s “game?”

Here are some specific ideas I came up with:

Back to basketball for a concluding thought. Phil Jackson, the winner of three straight NBA titles as coach of the Lakers and the Bulls, used various tricks to elevate his players’ games and wake them up from the boredom of a long season. Once he had them practice in complete silence; another time, he made them scrimmage with the lights out. When they fell behind in a game, he wouldn’t call a timeout, forcing them to figure it out on the court.