How to Delegate Effectively

How to Delegate Effectively 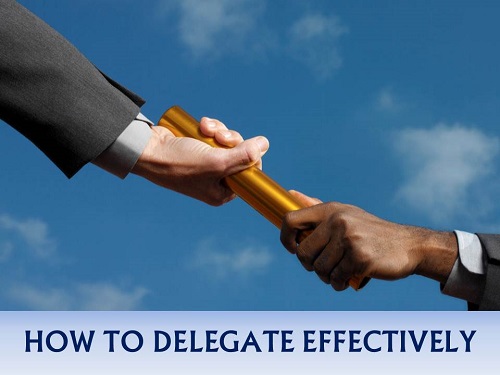 Delegating effectively is one of the most important things a manager does. The best managers in the world excel at knowing when to delegate, how to delegate, and to whom to delegate. A key to their success – perhaps the most important key – is that they’ve learned how to hire effective people and then delegate specific decision authority to them.  But it’s harder than it sounds, and it’s certainly not easy unless you fully understand certain tricks of the trade. This invaluable tool takes a look at the “dos” and “don’ts” of delegation, and highlights three levels of delegated decisions to help you build your management skills. Download the PDF – “How To Delegate Effectively”

What does it mean to “delegate?”

It means you’ve ascertained that someone has good judgment and that you trust him or her to make good decisions consistently. As a result, you delegate responsibility to make certain, specific decisions on a regular basis. And, as part of the delegation, you acknowledge openly that you are prepared to accept (and support) the decisions that he or she makes. Delegation is the key to building the management capacity of the organization. It’s what enables senior management to focus on longer-range issues while assuring that shorter-term, more tactical decisions are being made well.

Is that all there is to it?

The short answer is: no. Delegation is a subtle art. There are different levels of delegated decisions – and each level carries its own set of expectations and protocols. It is very helpful to distinguish between different levels and to gain a vocabulary to help you communicate clearly to others.

The flow of a delegated decision can cascade several levels down. For example, the CEO will likely retain certain responsibilities regarding the annual budget and delegate other decisions down. Division managers will in turn make certain delegations to the next level of Branch managers. The important thing is to spell out and define this flow in writing, so that people can use a well-understood process to consistently make sound decisions.

When we help organizations develop a detailed list of delegations, we typically use a table, such as in the following example of a company’s consultative and delegated decisions:

One could expand this table to show additional layers of delegation, so long as you specified each area of delegated responsibility and the appropriate level of delegation.