Psychologists know that people’s beliefs affect how they interpret data. So the Circle of Assumptions teaches us that people can get caught in self-justifying feedback loops, where they become blind to data which does not reinforce their beliefs. 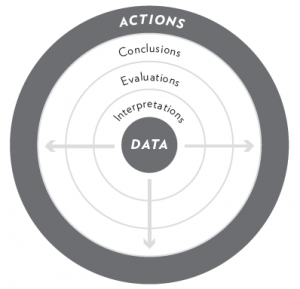 A critical element of productive conversation is the ability to assess what people really know, and what they think they know. The Circle of Assumptions teaches us to drive back toward the center, toward the data, and to keep checking each other’s assumptions. People need to ask:

Skillful communicators frequently probe their own assumptions and challenge them. This sets the stage for other people to do the same. When people focus on the data that they’re missing, it allows them to move forward to resolve the problem rather than remaining mired in their assumptions.

Adding a further layer of complexity is the fact that our brains are hard-wired with what psychologists call “the assumption of competence.” In essence, we perceive ourselves – and want to be perceived by others – as competent and infallible, not prone to error.

The assumption of competence is a well-known psychological syndrome that boosts our image of ourselves as competent and in control. It is thought that it played an ancient role in our survival by helping early human beings feel in control – despite overwhelming odds. Today, it drives much of how we behave. For example, it can result in self-justifying feedback loops, where people become anchored in their position, blind to data that does not reinforce their conclusions.

We unconsciously tend to assume we know more than we do, or that we have more power than we do.

The Assumption of Competence affects all of our communication and decision-making. Consider the following types of activities:

To communicate productively, a group has to be able to challenge its members’ assumptions. The most important assumptions to examine are always the ones that people cling to most dearly. Often these assumptions are based on deeply held beliefs. Challenging these beliefs and assumptions in a productive way helps us learn and understand what motivates us – and can dramatically increase the quality of the group discussion and decision-making.

To communicate productively, a group has to be able to challenge its members’ assumptions. The most important assumptions to examine are always the ones that people cling to most dearly. Often these assumptions are based on deeply held beliefs. Unmasking these beliefs and assumptions helps us learn and understand what motivates us – and raise the level of the group discussion and decision-making.

From a management perspective, this is a skill we need to model ourselves before we can ask it of others. By inviting other people to test our assumptions, we set an example we can then use in our communications with them.